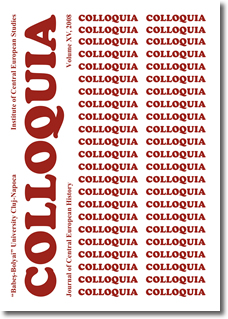 Orlin Sabev (Orhan Salih), A Portrait of the Printer as a Young Man. The Transylvanian Past of the First Ottoman Printer

Zsombor Tóth, From the Cradle to the Grave. Representations of Confessional Identity in Mihály Cserei's Writings (1667-1747) (A Case Study in Historical Anthropology)

István Bitskey, From Hungary to Europe (The Organization of Travel in the Early Modern Hungary)

Iacob Mârza, Portrait of the Historian

"I think it is a function, perhaps even a duty, of the historian to try to make sense of the past for his contemporaries...": an Interview with Keith Hitchins. Initiated by Maria Crăciun, Ovidiu Ghitta and Mária Lupescu Makó